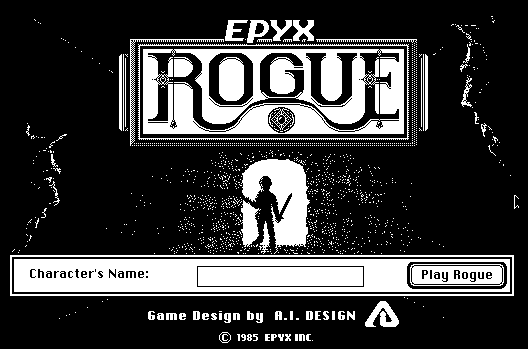 No, I never won it. Nobody has ever won it. Twice, I did manage to get my hands on the Amulet of Yendor, but died on the way back up.

If you had RedEdit, you could hack the C strings in the original game to tweak the weapons damage. Damage was stored in the format "XdX", as in "3d6". The dart was "1d1", which I hacked to "9d9", and got my brother to watch me killing dragons and ur-viles by tossing darts at them, which he would then run back to his (non-hacked) copy of the game to try, with predictable results :P

The original game had a bug where if you clicked too fast when you were confused, you would enter a locked-confused loop where the game no longer responded to input, and your character would run around banging his head on the walls until he died of starvation.

I hope this is permanent. I will win this game yet. It's only taken 30+ years so far. Maybe before I die. Thanks to the uploader... I still have my original floppy from 1985 (I managed to make ONE working copy with a particular version of Copy II Mac back in the day, but was never able to duplicate the feat), and I held on to an old 1mb Mac Plus just to play it on, but eventually it or the disk will die and that will be that. It crashed on the 4mb Plus, it would only work on a machine with 1mb or less.